We cannot let them fall. We cannot let Victor Zelensky and the Ukrainians fall. If he and his family are murdered, shame on us.

During the Bucha Massacre, hands were bound, and Ukrainians were shot at pointblank range, bodies mutilated and burned. Girls as young as fourteen were raped then killed by Russian soldiers.

The Ukrainians need fighter jets to rule the sky. They need long range weapons to inflict damage upon Russia itself. They need to take the fight to Putin. They need enough artillery, drone, and air superiority to overwhelm Russia and win.

As it stands, we have provided them with short distance defensive capabilities only. Not enough to win or attack Russia and Putin himself. We have only provided them with enough weapons to prolong this war and suffering. By only assisting with defensive capabilities, they can never win. And if they can’t win, we can’t either and neither can democracy.

What a black eye this would be upon the world, as dozens of countries supply weapons and aid, and still Ukraine could fall. Even with Russia’s antiquated military and arsenal, Ukraine could still fall.

If we supply them enough to win, the suffering would be limited. They must receive supplies enough to overwhelm the Russian military and stop playing catch up.

Just a few days ago France and Canada started supplying long range missiles. We must do the same. This fight is our fight. If we stand for what we claim to stand for, then this is our fight too. We must bring the fight to Putin. Russia is the invader. Russia and Putin have attacked a sovereign nation: murdering, butchering, leveling cities.

For God’s sake we must help this country stand for the ideals we claim to hold so dear. Ideals are not convenient but must be steadfast in the face of opposition.

Just because Ukraine is not NATO is irrelevant. Russia has no right to bomb, rape and murder. And because they have no rights, we have equal right to defend them, NATO or not. So does every leader and nation with a conscience.

Hospitals have been bombed. Over 500 schools destroyed. And there’s potential leaking at Chernobyl.

Now Syrian killers and Chechnyan mercenaries have been brought in attempt to assassinate Zelensky. Why are we not allowed to offer military assistance? Why does Russia get to bring in XYZ while we tiptoe? Russia is the aggressor here. Russia is the mass murderer. I don’t think we need to explain ourselves to them. Just because Ukraine is not NATO does not preclude that we cannot help defend them.

The bully has nukes. Iraq invaded Kuwait. Saddam did not have nukes. We invaded and liberated Kuwait. Kuwait was not in NATO. So, we need to stop using that as an excuse.

What will the world look like in five or ten years if Putin keeps the world hostage with his nuclear threat? Many countries have nukes.

War should never be a first response. But there are times when war is the only response.

We see the best of ourselves in Zelensky and Ukraine going against greater forces, trying to keep their independence and freedom. It reminds me of who we once were a couple hundred years ago and what overwhelming odds we were up against.

It seems, the world has awakened from its fat consumer intoxication. Tough choices are being made in Germany, Sweden, Finland to choose a side…the right side of history.

He needs ammo, not a ride. I have studied tactical martial arts for over twenty years and if you fight a defensive battle, you will experience heavy casualties and eventually your opponent will land heavy blows. If you are fighting a strictly defensive battle, eventually you will lose. “The best defense is a good offense,” George Washington once said.

Who owns the sky will win this. Russia keeps demanding negotiations then bombs them. You only negotiate when you are accepting defeat or conceding something. If Ukraine were able to attack Russia with long range missiles and air support, it would be Russia who may be asking for negotiations and cease fire.

Nothing Putin says is truthful. He should be honest about his desire for power, abuse, control, money. The lies are so thin they have become comical if not for their atrocities. Why would they need to spread propaganda if they were on the side of justice, truth, and integrity?

As the saying goes, “Evil prevails when good men do nothing,” or not enough. Evil grows when light fades.

We are letting a bully win and land endless blows against the body of the Ukrainian men, women, and children. How much longer will we watch? Every death is a collective wound to freedom. Every death weakens us.

The Ukrainians are everything we claim to be: fierce defenders of freedom, democracy and the pursuit of happiness. Zelensky is a symbol and reminds us of our best selves, the great country we claim to have. Well, if we don’t do more, those words are hollow. Convictions are only proven with action.

In a defensive battle, the stronger aggressor will get his shots in. You cannot keep backing up to the wall so to speak. Eventually there is no where to back up to.

They need superior and overwhelming firepower to win. Sanctions are not enough.

There is a moral higher ground here, higher than NATO.

We cannot let Ukraine fall. If they do, shame on us if Zelensky and his family are murdered and tyranny spreads. We have a chance to stop that.

Just today, over forty countries met and decided that Ukraine needed offensive weaponry to win. As we know it, Russia will soon be no more: the poisoning of opposition leaders, the murdering and suppression. There is no outcome, winning or losing, that they will retain their power and influence in the world.

Let’s help them see that through.

For many years Reyna practiced as an appellate court attorney with New York State’s public defender’s office before turning to writing full time. Her debut novel, UNREASONABLE DOUBTS, was named a finalist for the Women’s Fiction Writers Association Star Award in 2019. Her first novel for children, MY NAME IS LAYLA, came out in January, 2021, and Reyna’s latest novel, BOTH ARE TRUE, will be published in October, 2021. To learn more, please visit reynamardergentin.com.

Take a listen to our fascinating conversation about the courts and Reyna’s legal eagle books. Anyone interested in courtroom dramas, this is for you!

A short and sweet nugget today.

Did you earn that drink after work? Do you escape from the day and stress with dessert, pizza, alcohol or drugs? Have you moved your life and dreams forward first? Well, we’ve got to earn that drink and escape with couch credits. Listen why.

John Davis is one of a kind. He broke his back while helping a friend. A doctor told him that he would be paralyzed for the rest of his life. Learn how John healed himself and went on to become a stunt man and comedian as he traveled with the USO entertaining the troops in Iran and Afghanistan. He now speaks to audiences across the globe. “John inspires you to set and reach your maximum potential and awaken your Inner Action Hero!”

Listen to his amazing story and check him out at  www.corporateactionhero.com.

Check out my books and podcast at www.douglasrobbinsauthor.com.

Is your life out of control? Is your plate full? Do you need a platter or a table instead to pile it all on? Is time running away from you?

I want to share the first cover draft of Love in a Dying Town.

The backdrop is the dying factory town where Jim Bowen is trying to raise his daughter Lily with decay all around them. What does she think about it all? He doesn’t know. But love can still grow anywhere like a flower up through the concrete. 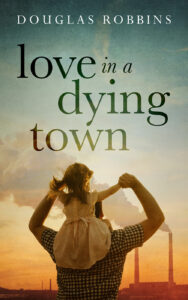 Love in a Dying Town will be released on 5/20, and I hope to count on your purchase, but not so I can take your money. Though, if you bought 10,000 copies, I’d be happy to. Seriously though, it’s for sales ranking and visibility.

The only way for a flower to grow is by watering it, enough sunshine, and the right environment to blossom. If not, it dies without ever being seen.

The same is true for all art, love, restaurants, and building a house; it really does take a village to get anything off the ground…

Thanks for the support. Have a great day.

Please share on social media, and spread the love.